Goodbye to Eddie: Until We Are Reunited 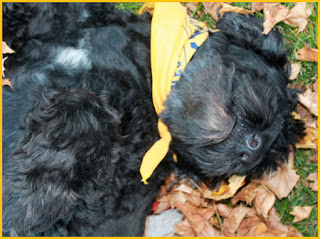 Eddie Paws
Feb. 24, 1998 - Dec. 17, 2011
On Saturday morning, at about 7:30 a.m., Eddie Paws went into full respiratory failure. We rushed him to the vet and were told there was nothing that could be done for him and that he would slowly suffocate. We did the only thing we could for our little boy to keep him from suffering.
We held him as the vet administered the drugs and I whispered to him that his beloved Grandmother, Doris, liked him much better than she did his brother Yorick.
The truth is that most people liked Eddie better than brother. Yorick was a bit of a snob and was quite happy to restrict his affections to my wife and myself, but Eddie’s heart was big enough to love everybody; and it was easy to love the bear-cub-sized Muppet. Everyone was taken with his abject desire to love and be loved and returned the affection Eddie so freely shared.
All you need to know about Eddie is said in the picture included with this post—Eddie rolling in leaves with the warm sun on his belly. Eddie enjoyed life. He was simply the happiest dog I’ve ever seen. He was so happy and carefree that his rehab Vet once remarked that he seemed almost simple.
Eddie wasn’t simple, but he was innocent. He knew that the simple joys in life, the love of your family, good food, and plenty of affection were all that was needed to be happy.
Eddie was fond of going to bed early and barking until someone joined him.  At bedtime Eddie has a strict "lights out" policy and would loudly complain if the lights were not out once he was settled. He was also very fussy about sleeping and liked his pillow just right. He would spend a good five minutes arranging his pillow and “blankie” to his liking before settling down. He was quite the funny fellow.
Unlike his brother, Eddie hated exercise. At the mere mention of a walk he'll drop to the floor, roll on his back and throw a paw in the air and use it to wave us away like he's pleading "please no walk!.  And if we could coerce him to walk he'll fake an injury to cut it short. Funny how his limp would disappears within sight of the house. Once through the door he's bouncing around for his treat.
Eddie, the Portuguese Water Dog who was afraid of water, learned to swim this year.  Lucky for us he seemed to like swimming more than he did going for walks. Still, he preferred to float about the pool on small raft than to actually swim.
The house is silent now. Eddie’s labored panting has gone still. His bowl sits empty in the corner and all that I have left of my little boy are memories. Yet I know that death has no power over love. I know that Eddie is always attached to us through the love we shared.
Rest in playfulness my boy until we are reunited.
Posted by The Dude of WV at 10:47 AM

The Dude of WV